The habanera, a musical style peculiar-called “round-trip” which has its origins in the nineteenth century in Cuba. The Indians brought, the name by which it was designated to people in the late eighteenth and throughout the nineteenth went to “Making the Americas.”
As Cuba’s Havana has highlighted especially amid other rhythms and music on the coast of the Iberian Peninsula has had a remarkable impact. 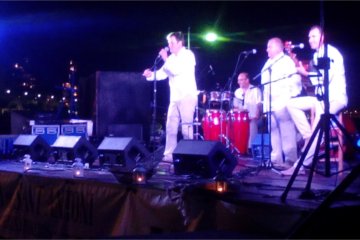 It is well known sung in Calella de Palafrugell (initiated in the year 1967) broadcast on television is also known to all the singing of Playa de Aro with 33 years of history and others.

The coastal town of Sant Antoni de Calonge this July 18 at the peak of friendship, has started his own singing of Haven and boleros with continuity in later years.

It was a night in which attendees could enjoy a pleasant breeze from SW listening groups, Arjau de Calella,  Bergantí de Malgrat de Mar and Neus Mar, the first woman to sing with success in the world of male the havenera.
Note the good organization of the event, the moving average part, as usual, they served a good burned, thus completing sung.
People of the habanera, remember this date, the third Saturday in July at 10 pm the breakwater friendship sung habaneras in Sant Antoni de Calonge.

2015-07-24
Previous Post: Internet “things” and renewable energies on the Iberian Peninsula
Next Post: Clitoral mysteries, keeper of the secrets of female pleasure